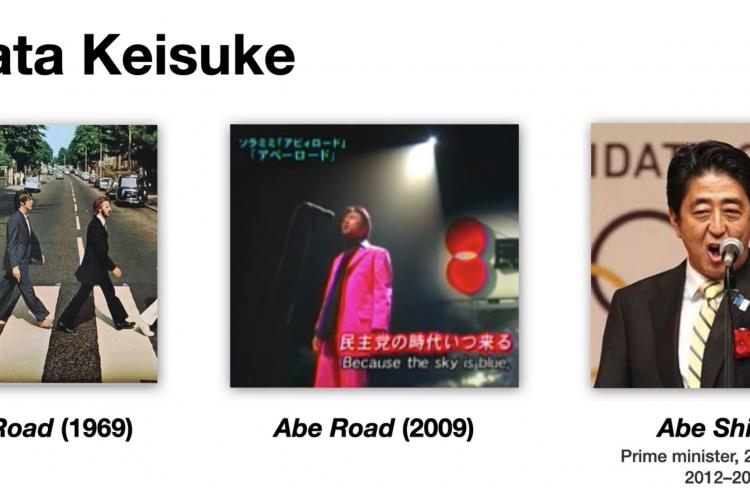 In May 2009, when the Japanese LDP government was in a weakened position, Kuwata Keisuke, lead singer of popular rock band Southern All Stars, performed a parody of the Beatles’ Abbey Road on his weekly television show. Backed by a band performing an uncanny cover of the album, he rewrote the lyrics into commentary on corruption in Japanese politics, fiscal problems, the death penalty, and other political issues.

This performance was highly unusual: Japanese recording artists rarely engage in politics. The recording and broadcast industries disallow lyrics on controversial topics, and management discourages artists from engaging in politics. Kuwata staged his rebellious gesture as a “mishearing” of a well-known album.

Kuwata transformed Abbey Road into political parody through linguistic sleight of hand. Kuwata chose Japanese lyrics with similar vowels and consonants (as demonstrated by their proximities on the International Phonetic Alphabet) to make them sound like the original English lyrics. By presenting his acrid commentary as a parody of this much-loved album and thus framing it as humorous entertainment, Kuwata was able to publicly criticize Japanese politicians.